I began skirting the wall of the kingdom of heaven when I was 11 years old, although I was only dimly aware that I had even come to a wall. Having lived a carefree life with few challenges, a wall was something I knew little of.

Who would have thought that a 6th grade old widow teacher would reveal a wall that would take 12 years to overcome? It was her remarks throughout the year of how she talked to God as a friend that first stirred the fog and gave me a glimpse of the eternal. I didn't quite understand it, but knew that whatever it was, I lacked it and wanted it.

Who best to clear the fog than the church? I made a dedicated attempt to go to the church of my parents and follow the rules, going so far as to riding my bike to church when my parents decided not to go. Noting my zeal for God, my parents even sent me to a private religious high school for my freshman year. But the harder I tried, the more I failed. Rather than continue in frustration and failure, I gave up on god. 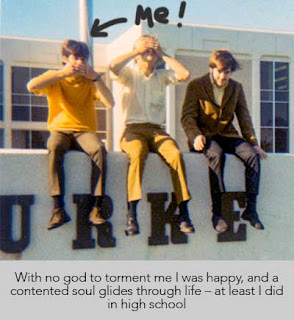 The hypocrisy I saw at school and in the church caused me to reject the idea that there was a God that could be known or that cared about me. With no God to torment me I was happy, and a contented soul glides through life – at least I did. I transferred to a public high school and thoroughly enjoyed the next few years.

There are those who believe a man would be happy to come to believe there is no God. Things would be so much easier. But isn’t there something deep inside that tells you that there has to be more? That there is more?

Just after graduating from high school I was sitting on the curb with some friends on a cool summer night. The concrete had gathered the warmth of the sun during the day and was now radiating the warmth back into our bones. We talked of the military draft lottery that would be held next week. Some would soon go off to war. We grew silent each lost in our own thoughts. I looked up at the bright stars and the majesty of creation reinforced what I knew to be true. Silently, I responded with “God, I know the universe and my life are not an accident, so if there is a way, I want to know you”.

I was already accepted and enrolled for college and would not be drafted for war. Some of my friends were not so fortunate. Moving away to the campus of a large university gave me a fresh start and I decided to give my search for God another try. I tried hard to follow the religious teachings and do what was right, but the harder I tried, the more I failed.

The cold fog of religion and cynicism which had already begun to sour me towards life thickened and completely obscured any vision of truth I had seen. My actions towards others were proof that things were not right inside me. I was aware of the lack of harmony in my heart. I was not at peace and was powerless to change. 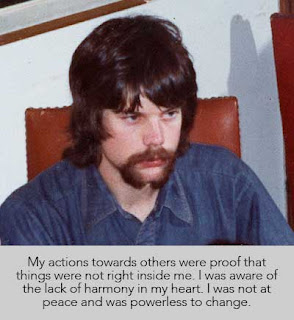 I was sick and there was nothing I could do about it.

Now married, and 6 years out of high school, I no longer bothered myself with God. I was cynical, not fun to be with, and my marriage was troubled. I suppose from the world's viewpoint nothing looked terribly amiss.

I attempted to find meaning in creating art, but found it to be an empty religion made up of people who thought themselves very clever.

I attempted to find meaning in work and in buying things. It kept me entertained but never satisfied. I can clearly remember telling my wife about another expensive purchase I wanted to make. As she walked out the door to go to work she said “That's fine, but you know it won't make you happy.”

As she drove off, her words haunted me as I knew them to be true. My world came crashing down. I understand why people turn to drugs, alcohol, or anything else that can ease the pain and mask a meaningless life. But I wanted truth, not a mask.

I began reading the Bible again but did not tell anyone, not even my wife, for fear of being thought of as a loser. This time, I decided to start reading near the end of the book for a change. The words I read began to stir the fog, and to my surprise the words made sense. No religion or system of theology had come between me and a common-sense reading of the book.

The overwhelming message was that Jesus loved me despite my faults. I could be completely forgiven. He would not even remember my sins. He wanted my friendship for eternity, and He was offering all of this without forcing it upon me. It was a free gift.

One night I decided to tell my wife the wonderful things I had been reading. She admitted that she too had been reading the very same Bible in secret. No wonder the place-holder ribbon in that Bible kept moving!

I sought out the help of a friend who helped us study the scriptures in the Greek. The vocabulary and structure of the original words reinforced and made clearer the english translation I was reading. Only God knows when we actually passed through the wall by the narrow door and first believed, but later that month on December 4, 1976, my wife and I prayed together to formally accept the free gift of salvation. It was as if a great weight had been lifted from our life, and it was! Our lives would never be the same.
Email ThisBlogThis!Share to TwitterShare to FacebookShare to Pinterest

No need to register... I just need to approve comments to avoid spam.

Steve
I have made a deliberate choice to live and paint in obscurity far from the art world. Without the pressure to sell or exhibit I am truly free to paint according to my own vision and convictions. I have no fixed plans for my art career and am not intent on arriving.